Obi, meaning sash, is a belt for traditional Japanese dress generally worn as part of kimono outfits. The obi for a man’s kimono is rather narrow, 10 cm wide at most, but a woman’s formal obi can be as wide as 30 cm and more than 4 metres long. The most intricate and colourful obis are generally made out of brocade for unmarried women and can often cost more than the kimono robe

Obis frequently carry a variety of symbols; these cushions are embroidered with high waves known as Araumi (rough sea), this design was initially portrayed with fierce sea creatures amongst the waves, but in recent centuries are usually stylised.  The waves represent surges of good luck, power and resilience. 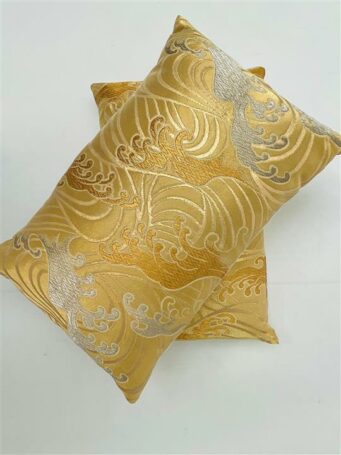